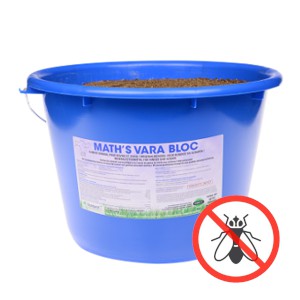 Math's Vara Bloc is a lick bucket that increases resistance to gastrointestinal parasites through preventive use. The lick bucket can be used in cattle as well as sheep and goats.

In practice, however, there was a request to have an additional effect against insects in addition to the preventive effect against gastrointestinal parasites (mainly tinkering as transmitters of bluetongue, flies, ...). We have adapted the composition so that Math's Vara Bloc also has an insect repellent effect from now on.